Parties, and the bones they've thrown to candidates

By PP - November 02, 2006
As we wind down into the final days of the election, everyone is filing what they've given to candidates. And, that includes what the parties have donated to the candidates.

Granted, it's probably not the final picture, as at the cutoff date, there were still a couple weeks left in the process. There are a few on here that make me cheer. But there's also a few on here that have me scratching my head.

First the Republicans (Click on the image to enlarge it to full size): 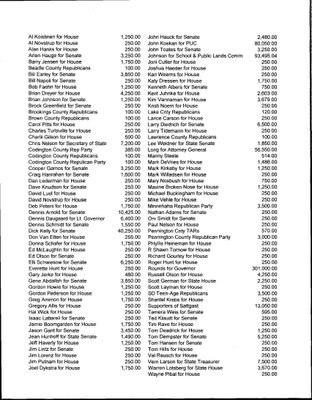 $250 to Bill Napoli who has a somewhat competitive contested race? $250 to Dave Novstrup, a new candidate in Brown county? One that really irks me - $250 to Isaac Latterell who has a very competitive race? All of these candidates are getting the same amount as Ed Olson, who doesn't have a race.

Compare that to the Democrats (again, click to enlarge):

It's reality that whether you love them or hate them - every Republican victor means your numbers for committee chairmanships are that much stronger. You might not agree with everyone, but, dang. You need those "R" numbers.

Now, I'm not going to pass final judgment at this point, as I know on both sides there's likely things still in the works in the waning hours of the campaign. In kind donations, more cash as promised, etcetera. But when the dust is settled, and the victors prepare to come to Pierre while the losers assess what went wrong, they're going to spend time wondering why.

And whether they like it or not, the kind of support in the election that their party gave them is going to be one of the first things they look at.

Anonymous said…
Dick Kelly over 40,000 dollars? I don't like Heidepriem but no state senator is worth that. We have many of those races that are just as contested and that money could do a lot more good being spread around than dumped into one race.
Larry Diedrich 6,500? If a former statewide candidate can't raise enough money to be competitive in his own district, maybe he shouldn't run.
There had better be some changes to this after the dust settles or Fredrick will be answering some tough questions!
9:00 AM

Anonymous said…
I think $20,000 to Kelly would have been more than enough. They had better have given Isaac more than $250 or they can kiss my county's quota goodbye.
9:17 AM

Anonymous said…
Think about this 9:22, only an idiot can't see the pattern here. Look who didn't get money in tough races? Look who controlls the purse strings? Who does Rounds like and who doesn't he?
9:28 AM

Anonymous said…
has that money for Sattgast got hiim out of hock yet?
9:32 AM

Anonymous said…
Dick Kelly over 40,000 dollars? Of course! We want Dick Kelly to win this election, but above all, this victory will just kick the hell out of Heidpriem’s chances of being Governor!

Sort of like killing two birds with one stone?

I agree with the Party giving more money to Dick Kelly. The outcome of this race carries way more rewards than any other race!
9:35 AM

Anonymous said…
But what happens when Kelly loses? 40k down the drain, and Heidepriem more viable than ever. Your worst nightmare.
9:52 AM

Anonymous said…
What's worse? Dick Kelly losing or the Dems picking up 5 or 6 additional seats because we're making emotional, rather than practical, decisions. When there are enough Dems and "Mainstreamers" to get to 18, we're going to wish we spread our money around a little better. Or at least Rounds will.

But at least Frederick convinced Bruce Whalen to run. That's worked out beautifully...
10:12 AM

Anonymous said…
Well 9:52 AM, the stakes are so high that it IS worth the gamble!

Yes, all contested Republican races are important, but some are more important than others!

When Dick Kelly wins, Heidpriem is knocked back in his quest to be Governor. If he can't win local elections, just how in the heck can he win a statewide election! What kind of price can you put on that?

And 10:12 AM, don’t worry about the Demos picking up 5 or 6 additional seats because it’s just not going to happen. The Republican Party HAS studied all the races and they aren’t worried! They know what they are doing. This isn’t their first rodeo!
10:30 AM

Anonymous said…
Hiedipriem will simply write himself a $40,000 check. His kids will have a slightly less awesome Christmas this year. Better than my kids, still, but they'll probably have to fly coach to Martha's Vineyard.

Anonymous said…
Since somebody brought up Bruce Whalen, I read his website. Sounds like he has some interesting experience and I like that he was in the National Guard. But it does not say (or at least I could not find it) how he currently makes a living. What does he do?
11:31 AM

Anonymous said…
What's with the $7,200 to Chris Nelson? Big bucks, no opponent? Poor decisionmaking there.
11:39 AM

Anonymous said…
11:39 AM said $7,200 went to Chris Nelson and he doesn't even have an opponent. Poor decision making there?

Well, I would guess some of the Republicans that are in a heck of a battle would of sure appreciated the extra $7,200.

I really don't know, but maybe Chris Nelson is deeply involved in the Republican election and this is a type of financial support for his support? We don't know what Chris Nelson may all be doing to insure Republican victories this year.

Are you suggesting that the SDGOP paid the Republican Secretary of State, the uimate election referee, to influence the election in favor of the Republicans? That is what it sounds like. For Chris to be very active beyond his campaign seems shady to me.
1:10 PM

Anonymous said…
Chris Nelson would not do anything shady, he is extremely honest. But to give him, Vern Larson, and Sattgast a total of nearly $30,000 is criminal when they have no races. Think what Latteral and others could do with that money.
1:23 PM

Anonymous said…
Maybe all should compare the money given to each candidate within a race and see if some of your opinions change...
I bet some will not and maybe some will.
1:40 PM

Anonymous said…
When you have a poor quality candidate like Dick Kelly, it takes a lot of money to prop him up and knock his strong opponent down.

Dick's big problem is his lack of effort. He just hasn't been wearing out any shoe leather. Kermit Staggers has done more walking and knocking on Dick's behalf than Dick has done for himself. Dick doesn't deserve to win, and when Heidepriem comes out the victor - despite all the GOP spending - there will be only one person to blame. Dick Kelly.
2:03 PM

Anonymous said…
The amounts shown as given by the Republicans to their candidates include money given by the county parties too. Not all of it came from the state. In some cases the counties gave much more than the state.
12:06 AM

Anonymous said…
It is disappointing that the party gave money to people who have no opposition. Just another reason why we need new GOP leadership in SD.
10:48 AM

Anonymous said…
Ted Klaudt is "promised" thousands by the chairman and receives a mere $250....Maher receives $7000 from the Democrat Party....makes one wonder where the loyalty to good Republican Legislators really is...interesting
7:45 AM

Anonymous said…
Maher will bring a sound agricultural conservatism to the State Senate. His common sense, business acumen, and education will serve 'all' well -- maybe the Republicans should have given him the $250!!!!
12:26 PM